Chronic and Adrenal Fatigue Treatment are both fairly common syndromes along with Fibromyalgia. The 3 do not necessarily go hand in hand but in a lot of cases, they do. They share similar causes and in a lot of cases, symptoms too. Most importantly the steps needed for recovery, are very much the same?

These are conditions that affect a lot more of the general population than most people realize, and becoming are more and more common.

These conditions can sneak up on you slowly or can be brought on suddenly by a highly stressful or several highly stressful events such as a death in the family, business collapse, marriage break-up. The list is seemingly endless and the causes are as individual and different for each person as the symptoms.

My main aim was to bring various causes and therapeutic options (mostly simple and quite surprising options) into your consciousness.

For example, in the case of Candida, described by many health care professionals as the scourge of the 21st Century, and a major cause of Chronic Fatigue, it took a lot of blind searching for me to uncover that simple peppermint oil can go a long way towards getting rid of Canadianism, and it is available in capsule form.

It took more digging and more time to discover enteric coated capsules are what you need so it survives the harsh environment of the stomach and makes its way to the intestines where it can work its magic. If I had found out about simple cures like this month earlier I would have recovered so much earlier.

Or that adding more salt to your protein water diet is important for recovery from Adrenal Fatigue, but not any old table salt. It must be unprocessed sea salt, like Celtic Salt or Himalayan Sea Salt.

I have struggled with Chronic Fatigue and Adrenal Fatigue for the last 2 years. It took a year and a half of going to different doctors with various, seemingly unrelated symptoms and being diagnosed with various conditions and prescribed various medications, none of which did any good and I just kept getting sicker, developing more and more health problems until I finally said ‘enough is enough’. 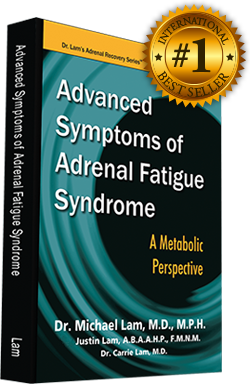 What followed was 6 months of full-time research, books, and the internet, seeing a wide range of doctors including several endocrinologists, neurologists and even sexual health specialists.

Occasionally I had to insist I was not depressed, it was not all in my head, anti-depressants will not help. Having to ask for various blood tests to be carried out, in the hope that they would find something, anything to explain the way I was feeling and so be able to set in motion a strategy for getting better.

I kept hoping they’d come back to me with something like diabetes, anything in fact, so I would know what was going on and have a point from which to continue. The not knowing and being told there didn’t seem to be anything wrong was torture.

I compiled a list of all my various symptoms and started looking for possible causes, and something that might link them all.

The key was treating my symptoms as symptoms, not as the main problem, which most doctors did, treating the symptom, but not looking for a cause.

What started to emerge slowly was that I was most likely suffering from Chronic Fatigue and Adrenal Fatigue.

Chronic Fatigue is also known as:-

Adrenal Fatigue can also go by:-

There are many names for these 2 conditions which are very difficult to diagnose. Many blood, urine and saliva tests come back as being in the normal range.

They were 2 of the most frustrating, scary years of my life. I was lucky to be in a situation where I could take time off and concentrate fully on research and finding a cure for myself, otherwise, I would still be suffering needlessly.

With more research, more digging me uncovered mercury toxicity was another factor from having all my amalgam fillings removed as well as Candida Yeast overgrowth, or Canadianism, and Leaky Gut Syndrome, LGS.

I decided to take my new found knowledge and create this website to help both myself in adapting my new healthier lifestyle fully and to hopefully help others who are in the same situation I was in 6 months ago – alone and scared with seemingly no hope of improvement.

I hope this website helps you avoid some of the time, pain, expense and frustration I went through and helps you set yourself on the road to recovery.

Now, the first thing I would recommend is to check to see if you might be suffering from a simple Candida yeast overgrowth or Candidiasis, and take steps towards changing your diet.